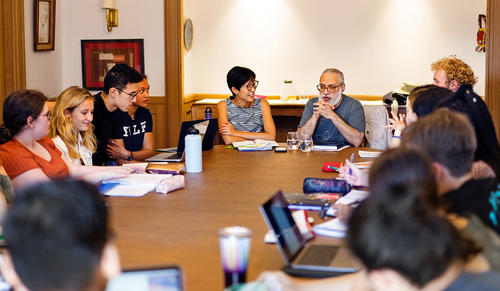 Twenty first-year students sit around a crowded dining room table in Pauli Murray College, mulling over “A Song on How My Thatched Roof Was Ruined by the Autumn Wind,” a work by the prominent 8th century Chinese poet Du Fu.

On this day — the fourth time the class has met — the Yale professors are encouraging the students to consider what makes this ancient text “pretty good,” that is, great.

“I’m not asking how it is thematically important, but rather, what are the nuts and bolts that went into this poem that makes it the kind of text that endures 12 centuries of Chinese tradition and then permeates the western tradition?” asks Toorawa, professor and chair of the Department of Near Eastern Languages and Civilizations. “Why are all of these people engaging with it? We want to explore this,” he adds.

The impetus behind the class, say the Yale professors, was to create a first-year curriculum that has all of the proven components of pre-existing Yale humanities curricula but also introduces new material that more closely reflects the world in which the students now live, and demonstrates how scholars actually study humanistic and primary material. The course also aims to make the obscure feel available and immediate to the students, and for the students to learn to have a comfort level with complex and enduring texts.

By reading and discussing texts to which readers have returned for centuries, the students will also learn how to be a scholar of the humanities at Yale, say the professors of the course.

“It is really easy to do a ‘what does this book say to you’ type of class,” says Lu, the Colonel John Trumbull Professor of East Asian Languages and Literatures and head of Pauli Murray College. “What is harder is to try to convey to the students that people are studying these materials now and may spend their lives doing it. What is it that they are finding exciting and new in these texts?”

In designing the course, the Yale professors were interested in building a set of corpora rather than a canon, because, says Lu, a book doesn’t have to be part of the canon to be a good book. “These are important books that people have come back to again and again. ‘Pretty Good Books’ is an implicit riposte to Great Books,” she adds.

Josie Cummings ’23 was first drawn to the course’s “simplistic, yet wildly understated title,” which she found to be both “ironic and interesting.”

“The emphasis of the course is not entirely on the subject matter of the six specific books, but on what our literary exploration of each of them can teach us about the field of humanities as a whole, the process of reading a particular text, and what exactly makes such a text great,” says Cummings. “What is fascinating to me as a result, is that our professors could have chosen six other supposedly ‘pretty good’ books without changing the essence of the course.”

Another essential element of the course was to create a community of learners, and “to emphasize the cohort nature of learning,” says Toorawa.

To further articulate their desire to create a cohort from the class, the professors have planned events outside of the classroom including field trips and shared dinners with the students. They also plan to gather again with the students in fall of 2020 over dinner to discuss a seventh book.

Cummings was intrigued by the sense of community that the professors are seeking to establish and “the fact that the class was designed to transcend the walls of the room in which we were to meet twice a week for one semester,” says Cummings. “I believed that this would create an incredibly unique and experimental environment for what is essentially a literature class, and I was eager to be a part of it,” she adds.

Lu and Toorawa hope the students will, through discussion of and engagement with the texts, come to understand that humanistic study has always been a tool for posing big questions, even as those questions have changed over time. They also want students to consider the ways in which reading and writing about books can help readers understand their place in the world.

Toorawa says he wants the students to understand the texts in the context of the time in which they were written, and also to understand that many of the topics they are reading about — which are expressed by human beings — are shared across time. “We are not more evolved or more intelligent than our ancestors were. We have the same preoccupations, the same needs, the same desires — the only real difference is technology,” says Toorawa.

“The great thing about reading pre-modern materials is precisely the way in which the characters in them are both just like us and absolutely different too,” says Lu.

In addition to the poetry of Du Fu, the six books chosen for this iteration of the course include another work from the Chinese tradition: “The Story of the Stone” (18th c.); a text from the Persian tradition: “The Shahnameh” (late 10th–early 11th c); one from the Arabic tradition: “Consorts of the Caliphs” (13th c.); as well as “The Tempest” (17th c.) and “Frankenstein” (19th c.).

One of the biggest takeaways of the course thus far for Cameron Germe ’23 has been the ability to develop the skill to “read between the lines” in the texts assigned to the students. Germe, who is planning on pursuing studies in chemistry at Yale, says he previously did not have much experience reading books like those assigned on the syllabus. “Before long I was not only analyzing ancient, foreign, translated texts, but also thinking about how I am analyzing these ancient, foreign, translated texts,” says Germe.

“I have learned to consider historical context and the author’s purpose in writing the piece, as well as the author’s target audience and how my own biases can get in the way of my understanding of the text. They have also pushed us to discuss the process of editing and translating these aged works and for what purpose they have been revived,” Germe adds.

When it comes to the writing assignments for the course, the professors note that they are interested in the process — not the product. “It is about the act of writing,” says Lu. “Often, students think that being a good writer is about mechanical things.”

Toorawa adds: “I found that when you let students write in forms that they are already comfortable with they write well. I tell them to pretend they are writing an email to a friend telling them about the book we are reading in class. Suddenly you get a cogent, well-argued grammatically correct paper. For this course we are also asking them to do writing all the time in little ways: short in-class assignments, for example, in which we ask them to produce concise and precise writing.”

Both Lu and Toorawa hope their students understand that their instructors are in a similar place when it comes to the study of literature. “We are not frozen in time. We are not ivory tower academics. This all only makes sense if we teach it and pass it on and if we are part of this conversation,” says Lu. “We are helping to create the community of readers that we want to enjoy being a part of.”

“The act of reading something with care and honoring the person who wrote it as somebody who is your equal is an elevated act of listening that makes you a better person,” says Lu. “To listen to other subjectivities who are coming at things from a very different position from your own but honoring them with your attention in the highest and purest way that you can — if we can talk about moral transformations in the humanities, to me that’s what it is about.”