Home » News » Summer of protest: Are we witnessing a turning point in Hong Kong politics?

Summer of protest: Are we witnessing a turning point in Hong Kong politics? 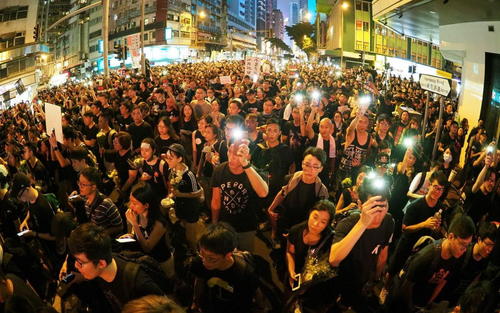 As Hong Kong’s summer of discontent passes its tenth week of street protests, analysts agree on one key point: this is the biggest political crisis the city has seen since its reversion from British colony to Chinese Special Administrative Region in 1997.

In March of this year, the Hong Kong government introduced a proposal to amend its extradition law, one that would allow extradition to China.  In response, an estimated one million people took to the streets on June 9, demanding its withdrawal.  There was a broad consensus – ranging from activists and lawyers to the business community and government officials – that this would compromise Hong Kong’s autonomy, and subject individuals to detention in China, where basic human rights could not be guaranteed.  After an incident on June 12 in which police used tear gas and rubber bullets on demonstrators, Hong Kong’s Chief Executive Carrie Lam agreed to suspend the bill.  Arguing that this was not enough, citizens came out again, two million strong, for a peaceful march on June 16.

Hong Kong has seen protests before, and especially since its reversion to Chinese rule in 1997, demonstrations can be seen as a barometer of its relationship to Beijing and the ruling Chinese Communist Party.  As a Special Administrative Region, Hong Kong is treated as a separate part of China; according to the 1984 Joint Declaration between the British and the Chinese and the city’s mini-constitution, Hong Kong would retain its economic and political system, having a “high degree of autonomy” for fifty years – until 2047.

Underlying protests past and present is the argument that this autonomy has been eroded.  In 2003 a protest against national security legislation led to the resignation of the first Chief Executive, and in 2012, citizens protested against legislation to introduce “patriotic education” into Hong Kong’s public school curriculum.  Before this year, the most significant protest was the 2014 Umbrella Movement, which occupied the streets in several areas of Hong Kong for 79 days and involved an estimated one million people.  Central to the Umbrella Movement was the demand that Hong Kong be allowed “universal suffrage,” or direct election of the Chief Executive, rather than Beijing’s interpretation, which was “direct election” from a slate of candidates it had pre-approved.  The Umbrella Movement ended with the withdrawal of protestors and the imprisonment of many of its leaders, from students to university professors to pro-democracy legislators.

In the five years since the Umbrella Movement, Hong Kong has seen a number of other cases that suggest further erosion of its autonomy, which is often referred to by the phrase, “one country, two systems.”  Individuals have been kidnapped from Hong Kong (or a third location) only to reappear in detention in China; democratically elected politicians have been removed from office for allegedly being disrespectful to China; and a British journalist was denied a visa for hosting a lecture at Hong Kong’s Foreign Correspondents’ Club by a speaker who advocates Hong Kong’s independence.  These cases are of concern to activists in Hong Kong, who fear for the fate of Hong Kong’s civil liberties and rule of law.  Such incidents are of growing concern even beyond pro-democracy advocates, because the independence of Hong Kong is what guarantees its status as an economic hub and a world city.  This is why even the business community reacted to the extradition bill this March; if anyone even passing through Hong Kong could be sent to China, it threatens the environment for business.

The suspension of the extradition bill, however, was not enough to satisfy protestors.  Their demands include the full withdrawal of the bill, an investigation into police brutality, a retraction of the term “riot” for the protests, the release of those arrested, and the resignation of Chief Executive Carrie Lam.  More recently additional demands for democracy, including universal suffrage and an end to a system by which half of its legislators are indirectly elected, have surfaced.

Though there continue to be peaceful protests and marches, the demonstrations have turned confrontational.  On July 1, protestors stormed Hong Kong’s Legislative Council building and defaced the symbols of government, violent clashes have occurred in outlying towns, shopping centers, and subway stations, and on two occasions white-shirted thugs have beaten protestors and bystanders.  In addition to surrounding Hong Kong’s government and police buildings, protestors have attacked Beijing’s liaison office and the Chinese flag.  The Chinese government, while originally only supporting the Hong Kong government verbally and at a distance, is increasingly suggesting that challenges to Beijing’s authority, the one country of two systems, will not be tolerated.

From the beginning, this summer of protest has been markedly different from demonstrations that came before.  Far more people participated in the marches of early June than in the singular protests of 2003 or 2012, in the Umbrella Movement, or in the annual commemorations of Tiananmen Square on June 4 and the 1997 Handover on July 1.  The extradition bill was different because it threatened a preexisting system, one that in recent years has been repeatedly challenged.  Many of those who have taken to the streets are first timers, people of an older generation who want to protect the young, and individuals who say that they protest today because they aren’t sure if they will have the right tomorrow.  The sociologist Ching Kwan Lee argues that the vocabulary of the protests has undergone a fundamental shift: today people talk of “desperation,” they refer to the few deaths and suicides as “martyrs,” and they use “institutional violence” to describe the state.[1]

Also unprecedented is the array of tactics employed by the protestors, which have far exceeded the class boycotts, street occupations, and public art that the world witnessed with the Umbrella Movement.  In order to protect identities and to be more flexible, demonstrators are using forms of social media to gather in certain locations and also to decide on next moves; in this way leaders cannot be identified as the Umbrella Movement’s were, and nimbleness allows protestors to also avoid arrest.  In a landscape of increasing digital surveillance, protestors wear masks to protect their identities and tape over security cameras as an additional measure.  And the politics of street increasingly looks like a battlefield, with police in riot gear facing off against demonstrators with helmets, masks, and makeshift shields.[2]

From public support to the language of resistance, from protest tactics to Beijing’s response, it is clear that Hong Kong politics has reached a turning point.  The most up-to-date news suggests a physical and rhetorical escalation, with demonstrators allegedly using gasoline bombs and Beijing now calling the situation a potential “colour revolution.”[3] Continued protests also threaten Hong Kong’s economy, from its stock market to its tourist industry.

Throughout, protestors have worked to appeal to an international audience, from surrounding local consulates to, in recent weeks, staging sit-ins in Hong Kong’s international airport, one of the most important hubs in East Asia.  But though Hong Kong is at a turning point, it remains unclear how it will all end.  Beijing would be glad to return to the status quo before the extradition bill debacle, but it cannot allow Carrie Lam to resign without appearing to accede to the protestors’ demands.  The Chinese Communist Party also cannot countenance open resistance to its authority, or Hong Kong’s economic deterioration.  The Hong Kong government – and its police force – has lost whatever legitimacy it had and remains beholden to Beijing to approve any further steps.

The protest movement itself walks a delicate tightrope between peaceful, multi-generational participation and more aggressive confrontation with the police. Its lengthening demands are unlikely to be met in full, as both the immediate retractions and the institutional changes would be seen as a loss of face for the government.  The leaderless quality of the protests, advantageous in playing a flexible defense and offense, nonetheless are a disadvantage in playing out an endgame.

Denise Y. Ho is an Assistant Professor of History at Yale University.  She is an expert in the history of modern China and is the author of Curating Revolution: Politics on Display in Mao’s China.

Ho is currently working on a new book on Hong Kong and China, entitled Cross-Border Relations.