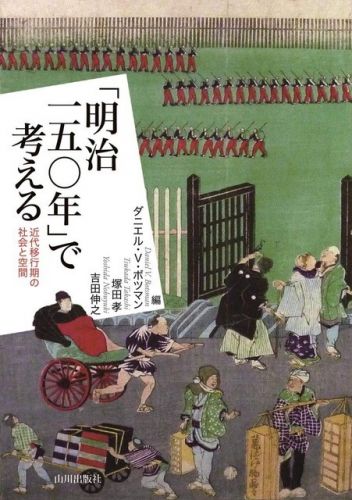 Professor Daniel Botsman has recently edited a new volume of essays in Japanese, with his close colleagues Yoshida Nobuyuki (emeritus professor, Tokyo University) and Tsukada Takashi (Osaka City University). Published by Yamakawa shuppansha, one of Japan’s leading academic presses, ‘Meiji 150-nen’ de kangaeru (Thinking Through ‘Meiji 150’) contains essays by eleven prominent scholars, reflecting on various aspects of social change in 19th century Japan. The project grew out of an international conference hosted by the Council on East Asian Studies in September 2017 and was inspired by the editors’ shared concern about the simplistic way in which important aspects of modern Japanese history were being portrayed by the Japanese government in the lead up to 150th anniversary of the Meiji Restoration last year.  Those interested in the topic may also wish to consult the articles included in a special issue of the English-language journal, Japanese Studies, about the history and politics of “Commemorating Meiji” co-edited by Professor Botsman and Adam Clulow of Monash University in Australia.  These articles are available online at https://www.tandfonline.com/toc/cjst20/current.