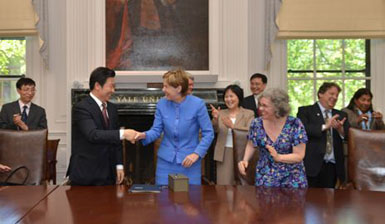 A delegation from Shandong University in China — which included the school’s president, Xu Xianming — recently came to campus to commemorate the expansion of its collaboration with Yale’s Department of Anthropology.

The signing event was presided over by Linda Lorimer, vice president and secretary of the University.

This Sino-American collaboration began in 1995 and includes a long-term archaeological survey in the Rizhao area of southeastern Shandong and excavations at the late prehistoric, Longshan period (ca. 2500-1900 BC) site of Liangchengzhen. The bi-national team is led by Anne Underhill, professor of anthropology at Yale and a curator at the Peabody Museum of Natural History, and Fang Hui, professor and dean of the Institute of Cultural Heritage and director of Shandong University Museum.

“This partnership in archaeology is exciting because Shandong University is one of the top universities for archaeology in China. It also is known for its wonderful new archaeology museum,” said Underhill. “This will also enhance further collaborations involving archeological research and fieldwork.”

The Yale archaeological team, in collaboration with Shandong University, has published several articles in both English and Chinese about the survey and excavation at the late prehistoric site of Liangchengzhen. Testing has already begun on new sites for future excavation, and there are currently ongoing projects to analyze ceramics, stone tools, and other archaeological remains. This joint work has been honored in China through Underhill’s receipt of the 2008 National Friendship Award and 2009 Honorary Citizenship at Rizhao City, Shandong.

“Collaboration between our two universities will increase opportunities for students passionate about the study of archaeology and provide a unique international experience to all those participating,” said Fawn Wang, assistant secretary of the Yale Office of International Affairs, who focuses on China initiatives.

Yale has a unique relationship with China in the field of archaeology, thanks to Kwang-Chih Chang, who taught at the University from 1961 to 1977 and is credited with establishing the archeology of China as a major field of research in the United States. Chang served as chair of the anthropology department from 1970 to 1973 and was chair of the Council on East Asian Studies from 1975 to 1977.