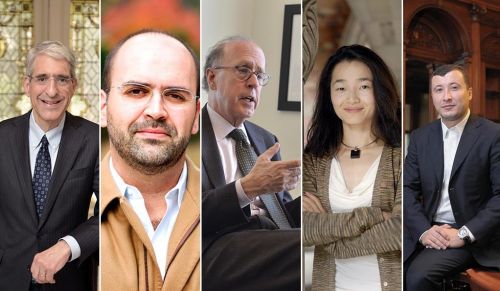 Discussions about U.S.-China relations often focus on the latest headlines — a new round of tariffs or fluctuations in financial markets — while overlooking the need to develop a broader strategy for guiding the United States’ approach to China’s rise as a global economic power.

“China 2049 — New Era or New Threat,” a panel discussion on Friday, Nov. 2 at the Yale School of Management, will seek to spark a conversation about defining a long-term strategic agenda for U.S. relations with China.

The panel will feature Yale President Peter Salovey along with the following faculty members, who represent disciplines from global affairs and economics, to political science and comparative literature:

Jamil Anderlini, Asia editor for the Financial Times, will moderate the discussion, which will take place at 4 p.m. in the Class of ’80 Classroom at Edward P. Evans Hall, 165 Whitney Ave. Anderlini oversees the FT’s coverage from Afghanistan to New Zealand, including China. He joined the newspaper in China in 2007, becoming Beijing bureau chief in 2011.

The event is open to the Yale community.

The “2049” in the event’s title references the year that will mark the 100th anniversary of the founding of the People’s Republic of China.

“Dates have special meaning for the Chinese, especially in an era of aspirations and forward-looking optimism,” Tsu said. “There will be challenges, though, not the least of which is different world areas’ reactions to China’s expanding presence, including its Belt and Road Initiative to strengthen infrastructure, investment, and trade in Asia, Europe, and Africa, and its more impactful infrastructure building around the world, which extends far beyond the original Silk Road idea north into the Arctic and south to Latin America.”

Strategic competition between the United States and China… will be the most important dynamic in world politics for the next few decades. … Yale is uniquely positioned to further debate on these crucial issues.

Since initiating reforms in 1978 to move to a market-based economy, China has experienced a vast economic expansion that has made the country of 1.3 billion people the world’s second-largest economy.

“Strategic competition between the United States and China — through political, ideological, economic, and military means — will be the most important dynamic in world politics for the next few decades,” Monteiro said. “How Beijing and Washington play their hands will shape the globe and set the background against which other states will increasingly need to position themselves. By gathering experts on all these dimensions of U.S.-China relations, Yale is uniquely positioned to further debate on these crucial issues.”

Tsyvinski, who has studied China’s economic growth, said that unlike in the United States — where elected officials are often distracted by the daily news cycle — China’s leaders carefully consider how the world is likely to appear 50 to 100 years from now.

“It’s clear that in 2049, the world will revolve around the United States and China as the two centers of power,” Tsyvinski said. “Yale faculty can provide hard and soft insights into how China will be shaped decades from now; how the United States will fit into the future world order; and the challenges the country is likely to face.”

Yale has a long and rich history of engagement with China dating to 1835, when Yale-trained physician and Protestant missionary Peter Parker established the first Western-style hospital there. Today, the university is involved in numerous programs and partnerships in China supporting a wide range of research and teaching.

“It will be a very broad discussion, grounded in expertise and experience, that we hope will trigger a conversation about how the world will be shaped decades from now,” Tsyvinski said.

The Cowles Foundation for Research in Economics is sponsoring the event.