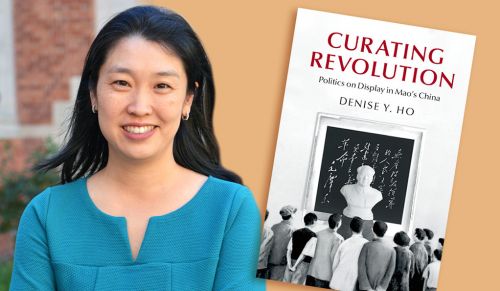 It was a long-standing curiosity about museums — one that was piqued during a fellowship as a Yale undergraduate — that sparked Denise Y. Ho’s desire to write her new book, “Curating Revolution: Politics on Display in Mao’s China.”

Ho, who is assistant professor of 20-century Chinese history, had a lifelong interest in museums, but it was during her time as a Light Fellow in China that she began to see how very different Chinese museums were in presentation, culture, and narrative from those in the United States.

While doing archival research for her Ph.D. dissertation, Ho encountered files about how Chinese cultural officials tried to protect objects of China’s antiquity in the middle of China’s Cultural Revolution. “That is what made me think: ‘What is the story behind this?’” says Ho.

“When we think about China during the Cultural Revolution from 1966-1976 — which was a time of great political campaigns, turmoil, and violence — we remember a movement called ‘the attack on the four olds,’” says Ho. “The four olds are: old thinking, old culture, old customs, and old habits. Red Guards — groups of young people encouraged by Chairman Mao to make revolution — took to the streets and smashed things as symbols of the old order of pre-1949 China.”

The Red Guard attack, Ho continued, included the ransacking of individual homes followed by the display of personal possessions confiscated from alleged class enemies. “By displaying the items that they confiscated,” explains Ho, “Red Guards presented evidence of class crimes, making the argument that it was right to rebel.”

Ho says that during the Mao period in China exhibitions took on two forms: socialist museums and new exhibitions. “Socialist museums feature collections that present a kind of historical narrative, such as a narrative about history or about the revolution,” she explains.

New exhibitions, by contrast, were forms of propaganda that taught people how to participate political campaigns, says Ho. “An example of this would be educational exhibitions that taught people about how class might be defined through objects. So, if someone had gold bars, American currency, a gun or knife, this was a marker that someone was a counter-revolutionary or class enemy. By putting these things on display, these exhibitions linked objects with class status,” says Ho.

“We usually think about class as an abstract category but here it is linked to a tangible personal possession,” says Ho. “I think this shows why objects were not only powerful but also could be dangerous.”

Ho chose the title of her book, she says, to draw attention to the idea of curation as a process. During her research for the book she discovered a document that described the steps needed to put on a factory exhibition in 1960s Shanghai. “The document explained that putting up the exhibition was just half the work, the other half was getting people to understand the exhibition’s propaganda message,” says Ho.

The process of curation suggests that curators and docents used objects, texts, narratives, and even docents’ own voices to create a story, explains Ho. During the Mao period in China, people would not visit a museum individually; they would go as a group and would listen to a docent, like schoolchildren receiving a lesson. “This type of propaganda was called a ‘living class education’,” says Ho. “If the docent told a tragic story of oppression you as the visitor had to reply with the right kind of emotion. You might be moved by someone else’s story to tell your own story, you might be inspired to shout revolutionary slogans, or you might even denounce someone as a class enemy.”

Ho incorporates the research that she conducted for her book into “China from Mao to Now,” a lecture course for students who have no background on China. “Unlike traditional history classes that move chronologically, the class begins with a two-week crash course focusing on major events of 20th-century Chinese history,” says Ho. “After that we proceed thematically — we start with the state, then move to economy, then society and then culture. The Monday class is the Mao period and the Wednesday class focuses on the ‘now’ period,” says Ho.

“I would like to see my students become sensitive observers of both their own culture and that of others. Whether they remember dates or names from my course after graduation, the ability to understand a society and culture in historical context is a skill I hope they will carry with them,” says Ho.