Home » Events » The 6th Ewha-Yale Conference: Connected Things in and beyond Asia

The 6th Ewha-Yale Conference: Connected Things in and beyond Asia 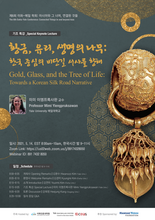 Gold, Glass, and the Tree of Life: Towards a Korean Silk Road Narrative

It is well recognized that the kingdoms of the Korean peninsula had a major role to play in the geopolitics of state formation in northeastern Eurasia during the ancient period. Recent archaeological research has underscored the extent to which the elite material cultures of these peninsular kingdoms were integrated into Eurasian distribution systems including the Silk Roads network. In this context the luxury objects which went to the grave with rulers of these kingdoms sometimes have surprising stories to tell.

With these thoughts in mind, from the perspective of art historical inquiry, and taking into account recent Korean scholarship, I analyze a group of gold objects retrieved from Silla tombs of the fifth and sixth centuries. I focus on those objects—crowns, pendants, and earrings—whose provenance is understood to be local and yet whose styles and techniques point to the arts complexes of two ancient pastoral civilizations of the Eurasian steppe, namely, the Yuezhi and the Xianbei. In so doing I address a riddle—how the forms and techniques of Tillya Tepe were intact hundreds of years later in Kyŏngju—and consider its implications for recalibrating our understanding of the dynamics of Eurasian cultural exchange from steppelands to Silk Roads with a distinctively Korean perspective in mind.

Mimi Yiengpruksawan completed graduate work at UCLA with a Ph.D. in Japanese art studies awarded in 1988. For her undergraduate degree at Occidental College she majored in medieval European art, followed by M.A. study at UCLA in the combined fields of East Asian (primary) and African, Oceanic, and Pre-Columbian (secondary). She lived in Japan from 1975 through 1984 and has also traveled extensively and conducted research in China, Tibet, India, Cambodia, and Thailand. Yiengpruksawan joined the Department of the History of Art at Yale University in 1990 and was awarded tenure in 1998.