Doing Ethnography in a Religious Field: Interventions, Tensions and Mediations 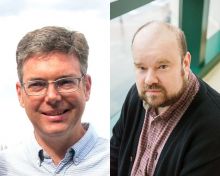 This talk is based on the newly released book Dream Trippers: Global Daoism and the Predicament of Modern Spirituality (University of Chicago Press), a multi-sited ethnographic study of transnational encounters between American spiritual tourists and practitioners and the Chinese monks and hermits of the sacred Daoist peak of Huashan. In this talk, the co-authors will reflect on how their ethnography unexpectedly and unavoidably became an intervention in the religious field they were studying, leading them to question the insider/outsider distinction in the study of religion. They will discuss their relationships—as friends, translators, and mediators —with the three main protagonists whose lives intersected during their study – a Chinese urban hermit, an American spiritual entrepreneur, and a Sinologist scholar-practitioner.

Dr. David A. Palmer is an Associate Professor of Anthropology at the University of Hong Kong (Department of Sociology and Institute for the Humanities and Social Sciences). After completing his PhD in the Anthropology of Religion at the Ecole Pratique des Hautes Etudes in Paris, he was the Eileen Barker Fellow in Religion and Contemporary Society at the London School of Economics and Political Science, and, from 2004 to 2008, director of the Hong Kong Centre of the French School of Asian Studies (Ecole Française d’Extrême-Orient). His books include the award-winning Qigong Fever: Body, Science and Utopia in China (Columbia University Press, 2007); The Religious Question in Modern China (co-authored with Vincent Goossaert, University of Chicago Press, 2011, awarded the Levenson Book Prize of the Association for Asian Studies); and Dream Trippers: Global Daoism and the Predicament of Modern Spirituality (co-authored with Elijah Siegler, University of Chicago Press, 2017).

Dr. Elijah Siegler is a Professor of Religious Studies at the College of Charleston in South Carolina. He has degrees from Harvard University and the University of California at Santa Barbara. He has published an introductory textbook on New Religious Movements (Routledge, 2007), and articles about religion in film and television, on American Daoism, and on religious studies pedagogy. He recently edited Coen: Framing Religion in Amoral Order (Baylor University Press, 2016) and co-wrote, with David Palmer, Dream Trippers: Global Daoism and the Predicament of Modern Spirituality (University of Chicago Press, 2017)