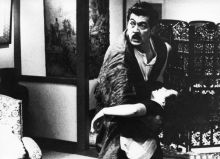 On September 22, 1947, a typhoon is approaching the northern island of Hokkaido when a fire breaks out in a pawnshop in the town of Iwanai. Just before that, two men had fled the shop and joined another before heading off to Hakodate, a city that was in pandemonium trying to rescue survivors of the shipwrecked Aomori-Hakodate ferry. One of those helping is Detective Yumisaka from Iwanai. When he returns home, he finds out that the fire, apparently set to cover up a murder-robbery, has burned down much of the town. The warden of the Abashiri Prison visits and suggests that two recently released inmates, Numata and Kijima, might be involved. Investigating them, Yumisaki discovers they were staying at an inn with a man named Inukai Takichi. Checking out Hakodate, he finds out that one of the rescue boats is missing. Crossing the Tsugaru Strait, he finds a spot where the boat was probably burned and collects some of the ashes.
In the forest of the Shimokita Peninsula, Inukai is walking alone until he finds a poor house in which an old woman, in the custom of the area, is trying to summon the spirits of the dead. Scared, Inukai runs off and hops on a logging train and meets a woman named Yae who gives him food. Following her, he finds out she is a prostitute in Ōminato. He spends the night with her, but even after she cuts his nails, refuses her entreaties for him to stay. Instead he leaves her a bundle of cash and escapes. When Yumisaka asks Yae about Inukai’s whereabouts, she lies, intending to use the money to pay off her debts and flee to Tokyo. Returning to Iwanai, Yumisaka receives the first photos of Numata and Kijima, and recognizes them as the two bodies that had seemingly been recovered from the ferry but had been left unclaimed. He figures Inukai killed them. Thinking Yae knows something, he heads for Tokyo to find her, but Yae, sensing his presence, evades him by moving to another red-light district.
Ten years later, the red-light districts are being closed down as prostitution has been made illegal. Yae spots a newspaper article about a Maizuru company donating a large sum of money to help convicts rehabilitate. The head of the company, Tarumi Kyōichirō, looks exactly like Inukai. Yae then decides to visit Maizuru where events take a turn for the worse.

Ever since the success of the French crime film Zigomar in 1911, the Japanese film industry has produced numerous movies depicting criminals and the detectives who try to apprehend them. Chivalric yakuza, modern mobsters, knife-wielding molls, hardboiled gumshoes, samurai detectives, femme fatales, and private eyes populate Japanese cinema, from period films to contemporary dramas, from genre cinema to art film, from the work of genre auteurs like Makino Masahiro to masters like Kurosawa Akira. Cinematic representations of crime have served in Japan to draw the boundaries of society and the nation, define the nature of reason and epistemology, shape subjectivity and gender, explore the transformations of modernity, and even express the desire for political transformation. Surprisingly, little of this rich lode of cinema has been introduced abroad. This series, co-sponsored with the National Film Center of the National Museum of Modern Art, Tokyo, will present some of the masterworks of Japanese gangster film, detective cinema, and Japanese noir, in subtitled archive prints that have rarely been seen abroad. The series will conclude with a symposium featuring an international panel of experts on Japanese crime film, and a world premiere screening of a newly struck English subtitled print of the classic gangster melodrama, CHUTARO OF BANBA. All films are in 35mm with English subtitles. This is the eighth of 10 films.