The Invisible Valley: An Epic Experiment in Creative Co-Translation 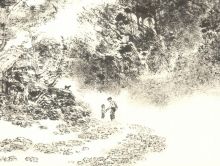 When Chinese novelist Su Wei and his translator Austin Woerner first met in 2005, little did they know that their friendship would spark a ten-year-long experiment in creative co-translation that would take them from the classrooms of Yale to the mountains of Hainan Island and back again. Join Woerner and Su and as they recount this literary odyssey, culminating in the publication of Woerner’s English translation of Su’s novel titled The Invisible Valley in English this year. Author and translator will reveal the story behind the story, a coming-of-age narrative set during the Cultural Revolution against a backdrop of rainforest landscapes, Taoist mysticism, and Cantonese folklore. In the process, they will share the joys and complexities of translation and their adventures in Chinese literature both on and off the page.

A Chinese-English literary translator, Austin Woerner has translated two volumes of poetry, Doubled Shadows: Selected Poetry of Ouyang Jianghe and Phoenix, and edited the English edition of the innovative, bilingual Chinese literary journal Chutzpah!. Together with Ou Ning, he co-edited the short fiction anthology Chutzpah!: New Voices from China. He has a BA in East Asian Studies from Yale and an MFA in creative writing from the New School, formerly taught creative writing and translation at Sun Yat-sen University in Guangzhou, and is now a lecturer at Duke Kunshan University.

Author Su Wei spent ten years working on a rubber plantation on Hainan Island during the Cultural Revolution, and afterward he was among the first mainland Chinese to pursue an advanced degree in the United States. He returned to China and played a key role in the Beijing literary scene during the 1980s “culture fever,” relocated permanently to the U.S. afterward, and since 1997 has been a lecturer at Yale University. He has published three novels and several books of short stories and personal essays in Chinese. The Invisible Valley, translated by Austin Woerner, is his first book to be published in English.