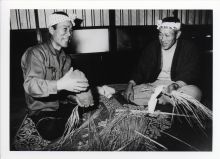 After realizing that he still could not understand the farmers, Ogawa and his staff moved to Magino in Yamagata to begin farming themselves. From this experience emerged a series of films, beginning with Raising Silkworms, that interweave local folktales with meticulous records of farm activities, to evoke rural life from within.