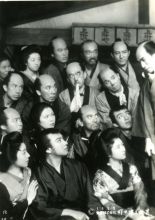 In a run-down tenement in Edo’s Ryōgoku district, the much-disliked landlord Kanbei is found murdered one night. Suspicion first falls on Bunkichi, who always verbalized his resentment against Kanbei, and on the rōnin Shinozaki Genzaemon, who owed the landlord money. The police officials Rokunoshin and Hachigorō begin questioning all the colorful inhabitants of the tenement. Since Kanbei was killed with a sword, they first focus on Genzaemon and another rōnin, Yokoyama Kyūma. Kyūma, in love with Genzaemon’s daughter Okyō, decides to falsely confess to the crime because he thinks her father did it. But with no evidence to back the confession up, Kyūma is released. Hachigorō suspects Bunkichi, but cannot manage to pin anything on that slick character. Bunkichi, however, is warned about Hachigorō by the locksmith Daisaburō, only to then find out that Daisaburō himself has been murdered. The now complex investigation is turned over to a higher authority: the magistrate Tōyama Zaemonnojō. When the residents of the tenement are all brought in for questioning by the magistrate, however, they are in for a big surprise: Tōyama looks surprisingly like Bunkichi! Under the magistrate’s careful questioning, a larger conspiracy behind Kanbei’s murder begins to emerge.

Ever since the success of the French crime film Zigomar in 1911, the Japanese film industry has produced numerous movies depicting criminals and the detectives who try to apprehend them. Chivalric yakuza, modern mobsters, knife-wielding molls, hardboiled gumshoes, samurai detectives, femme fatales, and private eyes populate Japanese cinema, from period films to contemporary dramas, from genre cinema to art film, from the work of genre auteurs like Makino Masahiro to masters like Kurosawa Akira. Cinematic representations of crime have served in Japan to draw the boundaries of society and the nation, define the nature of reason and epistemology, shape subjectivity and gender, explore the transformations of modernity, and even express the desire for political transformation. Surprisingly, little of this rich lode of cinema has been introduced abroad. This series, co-sponsored with the National Film Center of the National Museum of Modern Art, Tokyo, will present some of the masterworks of Japanese gangster film, detective cinema, and Japanese noir, in subtitled archive prints that have rarely been seen abroad. The series will conclude with a symposium featuring an international panel of experts on Japanese crime film, and a world premiere screening of a newly struck English subtitled print of the classic gangster melodrama, CHUTARO OF BANBA. All films are in 35mm with English subtitles. This is the sixth of 10 films.