Narita: Peasants of the Second Fortress 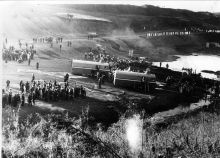 One of the centerpieces of Ogawa’s career was his series of films recording Sanrizuka farmers’ long struggle against the construction of the Narita Airport. Ogawa’s camera literally stands with the farmers behind the barricades in this action-packed document of their often bloody battles with armies of riot police. The second of four films by Ogawa Shinsuke.

Another Village: The Radical Documentaries of Ogawa Shinsuke
Ogawa Shinsuke was one of the pillars of postwar Japanese documentary, whose influence has spread throughout Asia. Pursuing committed, independent documentary, he soon realized that it wasn’t enough to stand on the side of the oppressed: one had to live with them, and experience their different sense of time and space. Ogawa’s films did not just document some of the great struggles in modern Japan, they also recorded alternative modes of living that were disappearing with capitalist development. This series presents four masterworks representative of different stages in Ogawa’s career.