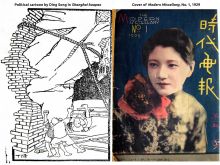 This talk will examine the seductive images of China’s new culture and society that emerge from the pages of the tabloid periodical Shanghai huabao (Pictorial Shanghai) from 1925 to 1933. Closely connected to Shanghai Art Academy, and by featuring in words and images the exhibitions, performances, and personal lives of both China’s artistic elite and its aspiring youth, Shanghai huabao created a complex and richly textured lifestyle into which its readers were lured. The appearance of photographs, gossip, publicity and reviews on its pages offers vivid material for better understanding artists, both male and female, of the formative decade of the 1920s. Over time, the publication created a vision of a new Chinese modernity, demarcating those areas of traditional social and artistic practice that might suitably merge with elements from an imported lifestyle.  Shanghai huabao vividly embraces the cultural psychology of the late 1920s, when writers might be both classically-educated and European-trained, and simultaneously speak in a tone of Neo-Daoist escapism and European ennui.  This talk will argue that Shanghai huabao, despite the seeming randomness of the articles and images it juxtaposed, served to effectively create and document the new tastes of a cosmopolitan Chinese culture, a hybrid culture that has left its traces in Shanghai’s cultural world today.

Julia Andrews is a professor in the Department of the History of Art at Ohio State University. She received her BA in Asian History from Brown University, her MA in art history from Harvard, and her PhD from the University of California, Berkeley, where she wrote a dissertation on the late Ming painter of Daoist and Buddhist subjects, Cui Zizhong (?-1644) under the supervision of James Cahill. She was assistant curator of Far Eastern Art at the Los Angeles County Museum of Art before moving to OSU. Her first book, Painters and Politics in the People’s Republic of China, 1949-1979, won the Levenson prize in 1996. Her most recent book, co-authored with Kuiyi Shen, Art of Modern China, won the Humanities book prize of the International Convention of Asia Scholars in 2013. In 2013 she and Shen also co-authored Light Before Dawn: Unofficial Chinese Art, 1974-1985, the catalogue of an exhibition they curated for the Asia Society, Hong Kong Center.

The large format monthly Shidai (Modern Miscellany) was published between 1929 and 1935, spanning a period during which the Nationalist government vigorously promoted its agenda of building a new, modern China.  After two decades of political chaos that followed overthrow of the last dynasty, the magazine seemed to celebrate the new potential for national progress.  It was a showcase of the cultural world of Shanghai, and explored through visual images the many ways in which China had become a modern society.  By using striking graphic design, compelling cover images, up-to-date layout, new typography and lettering, and sophisticated printing technology, Shidai  both successfully represented, and was itself part of, China’s modernizing visual culture.  The magazine introduced the most visually powerful aspects of contemporary culture to its domestic audience, but at the same time tried to show a modern nation to the outside world.  Shidai led a new trend of using stunning images to present current world and national events, news of celebrities and film stars, movie reviews, sports news, art exhibitions, women’s fashion, and comic strips and cartoons.  This study suggests that Shidai, edited throughout its existence by well-known artists and writers, conveyed the cultural ideals of Shanghai’s literary circles.  Its contributors shared the nation’s mission of building a new modern China. What was printed on the pages of Shidai, however, was not government propaganda, but demonstrated the convergence, for a time, of the hopes of Shanghai’s cultural world with the political agenda of the new national government.

Kuiyi Shen is Professor of Art History and Director of Chinese Studies Program at University of California, San Diego. A native of Shanghai, he was the director of the Editorial Department at the Shanghai People’s Fine Art Publishing House before he pursuing graduate study in US in 1989. He received hi Ph.D. in Art History from The Ohio State University, and was a Postdoctoral Fellow at the Center of Asian Studies of Stanford University.  His current research focuses on modern and contemporary Chinese art and Sino-Japanese cultural exchange. Among his numerous publications are A Century in Crisis (New York, 1998); Between the Thunder and the Rain (San Francisco, 2000); Arts of Modern China (Berkeley, 2012), which was awarded the 2013 ICAS (The International Convention of Asia Scholars) Book Prize in Humanities, and was recognized as one of the 2013 Choice Top 25 Outstanding Academic Titles.  He also maintains an active career as a curator. Among the exhibitions he has curated, the best known are A Century in Crisis: Tradition and Modernity in the Art of Twentieth Century China held at the Guggenheim Museums in New York and Bilbao in 1998, Reboot: The Third Chengdu Biennial in 2007. He is a recipient of fellowships and awards from the National Endowment for the Arts, Social Science Research Council, Japan Society for the Promotion of Science, Stanford University, University of California, Leiden University in the Netherland, and Sophia University in Japan.