Home » Events » Resistant then Compliant then Accomplice: Gradations of Resilience in Nagai Kafū’s Work on Ginza-Shinbashi

Resistant then Compliant then Accomplice: Gradations of Resilience in Nagai Kafū’s Work on Ginza-Shinbashi 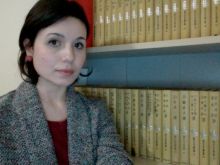 An attentive observer of the space surrounding him, Nagai Kafū (1879-1959) appeared particularly fond of spaces inhabited by geisha, actors, prostitutes and other vocational types of people embodying endangered collective memories vis-à-vis systems of power, marginal social figures hardly aligned with the dominant ideologies; in his mindscape, backward shitamachi neighborhoods seemingly left behind by the rebuilding of the city, alongside leisure districts and pleasure quarters, represented spaces of resistance against—but also of resilience to, thanks to their capacity to withstand and cope with social and political change—the powerful bunmei kaika discourse. I will focus on a number of stories written between 1911 and 1912 and included in the volume Shinkyō yawa (Night Tales from Shinbashi), all set in the then rising leisure district of Ginza-Shinbashi, to show how Kafū’s portrayal of the area conveyed his insight that in order to thrive a district had to comply with the change, often cold-heartedly; further, I will stress how Tsuyu no atosaki (During the Rains, 1931) echoed Shinkyō yawa’s criticism of Shinbashi for having become the center of the so-called machiai seiji (tea house politics), a phenomenon of political informality that brought politicians to the geisha houses of the area contributing to the flourishing of the district but de facto depriving it of its former status of space of resistance: in the wake of the 1930s, Ginza-Shinbashi was a thriving, ‘exclusive’ neighborhood no longer able to stir any sense of belonging.

Gala Maria Follaco, Ph.D. (2012) is Assistant Professor of Japanese Studies at L’Orientale University of Naples. She has translated the works of several Japanese writers, such as Yoshimoto Banana, Yoshida Shūichi, Tanizaki Jun’ichirō, Hara Tamiki, Kawabata Yasunari, Matsumoto Seichō and published articles on urban representation in modern and contemporary Japanese literature. Her monograph, A Sense of the City. Modes of Urban Representation in the Works of Nagai Kafū (2017), examines Nagai Kafū’s (1879-1959) literary construction of urban spatialities from the late 1890s to the late 1930s. She has curated a critical edition of seven previously untranslated stories by Higuchi Ichiyō (1872-1896) and excerpts from her diaries, L’ultimo dell’anno e altri racconti (2016). Her publications include: The Soundscape East of the River: Sonic Icons in Nagai Kafū’s Writings; Close yet far. Fractured identities in Nagai Kafū’s American Writings; Hyōshō kūkan toshite no furusato. Tanizaki ga mita Shōwa shoki no Tōkyō – Geidan o shisa toshite (2016) and The Quest for a place to be: Fictional Portrayals of Tokyo in contemporary Japanese Literature (2014).