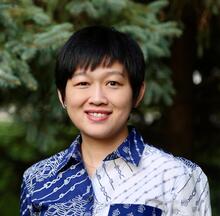 This talk aims to open up new spaces to discuss art and literature in socialist China. It analyzes the overarching themes of “labor” and “production” in the cinematic campaigns to promulgate the Marriage Law in 1950s China and reevaluates the primary goal of the law. By examining the contrasting representations of landlords and communist cadres, “backward” peasants and model workers, matchmakers and women’s directors in works such as Children’s Marriage (Ernü Qinshi, 1950), Zhao Xiaolan (1953) and Liu Qiao’er (1956), this talk explores how and why labor was romanticized in 1950s PRC films. It further investigates the ways in which the aestheticization of labor in seventeen-year literature (1949-1966) helped to create a new socialist ideology and the new socialist subject.

Xian Wang is an Assistant Professor in the Department of East Asian Languages and Cultures at the University of Notre Dame. Her research interests encompass modern Chinese literature, film, popular culture, gender and memory studies. Her current book project Flesh and Stone: Negotiating Memories of Chinese Female Revolutionary Martyrs examines how contested fictional and historical records, stone monuments and artistic representations of female martyrdom formed national memory. She is also conducting research on a second book project tentatively titled Producing Socialist China: The Aestheticization of Labor in Seventeen-year Literature (1949-1966). It examines the representations of “labor” and “production” in Chinese art and literature of the 1950s and 60s, and investigates the relationships between production and consumption, distribution and leisure. It explores how the idealization of selfless labor helped to create a new socialist ideology and the new socialist subject.

Register in advance for this webinar:
https://yale.zoom.us/webinar/register/WN_HyAwdHIWTnCXo9feQOIkfg