Spatial Dunhuang: The Story of the Mogao Caves Retold 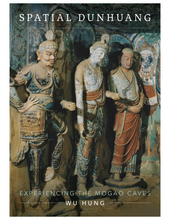 This talk introduces the main thesis of the speaker’s forthcoming book, Spatial Dunhuang: Experiencing the Dunhuang Caves, which experiments with a new way of analyzing Dunhuang art—and Buddhist grottoes in general. Starting from re-examining the Mogao Caves through the perspective of space, this analysis also leads us to think about the complicated temporalities of this large cave complex.

Wu Hung has published widely on both traditional and contemporary Chinese art. His interest in both traditional and modern/contemporary Chinese art has led him to experiment with different ways to integrate these conventionally separate phases into new kinds of art historical narratives, as exemplified by his Monumentality in Early Chinese Art and Architecture (1995), The Double Screen: Medium and Representation of Chinese Pictorial Art (1996), Remaking Beijing: Tiananmen Square: the Creation of a Political Space (2005), A Story of Ruins: Presence and Absence in Chinese Art and Visual Culture (2012), and Zooming In: Histories of Photography in China (2016). Several of his ongoing projects follow this direction to explore the interrelationship between art medium, pictorial image, and architectural space, the dialectical relationship between absence and presence in Chinese art and visual culture, and the relationship between art discourse and practice.

This event is being co-sponsored by the Council on East Asian Studies, The Department of Religious Studies, and The Glorisun Global Network for Buddhist Studies