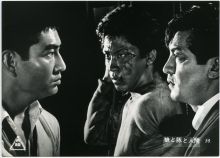 Jirō is the second brother of the Kuroki family. He has just been released from jail and is already scheming a new heist. For this mission he hopes to recruit his younger brother, who is referred to as Sabu by his friends. This is a difficult task, as Sabu resents his brother for his lack of concern toward their mother who has just died. Sabu is nevertheless lured to take part in his brother’s plot when Jirō offers him what seems to be a large sum of money. However, this is not going to be a happy family operation. First, the target of the plan is a powerful yakuza gang, led by a ruthless boss, for whom the eldest Kuroki brother Ichirō is working. Second, Jirō offers his younger brother only a small share of the loot but not lesser exposure to the risks. While the robbery itself is successful, when Sabu finds out about what really has been stolen, he betrays his brother and runs away with the spoils. Jirō thus sparks a war between the three brothers. But before they can reconcile, they also need to face their partners in crime, particularly the yakuza gang leader, who fights to reclaim his fortune.

Ever since the success of the French crime film Zigomar in 1911, the Japanese film industry has produced numerous movies depicting criminals and the detectives who try to apprehend them. Chivalric yakuza, modern mobsters, knife-wielding molls, hardboiled gumshoes, samurai detectives, femme fatales, and private eyes populate Japanese cinema, from period films to contemporary dramas, from genre cinema to art film, from the work of genre auteurs like Makino Masahiro to masters like Kurosawa Akira. Cinematic representations of crime have served in Japan to draw the boundaries of society and the nation, define the nature of reason and epistemology, shape subjectivity and gender, explore the transformations of modernity, and even express the desire for political transformation. Surprisingly, little of this rich lode of cinema has been introduced abroad. This series, co-sponsored with the National Film Center of the National Museum of Modern Art, Tokyo, will present some of the masterworks of Japanese gangster film, detective cinema, and Japanese noir, in subtitled archive prints that have rarely been seen abroad. The series will conclude with a symposium featuring an international panel of experts on Japanese crime film, and a world premiere screening of a newly struck English subtitled print of the classic gangster melodrama, CHUTARO OF BANBA. All films are in 35mm with English subtitles. This is the ninth of 10 films.