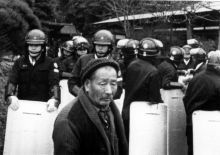 After years of following the Narita struggle, Ogawa turned his camera from the action towards the way of life of the farmers and what they were trying to defend. Arguably his masterpiece, Heta Village is less a document than an attempt to embody different modes of time and space.  The third film in a series of four.