What Remains Invisible After Chinese Science Fiction Has Entered the Center Stage? 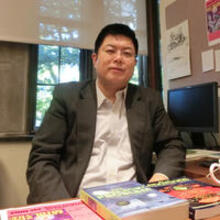 While Chinese science fiction gains more visibility in the world, the new wave has gradually lost its momentum along its meandering course of succeeding in the market and gaining recognition from the government. In 2019, the image of Chinese science fiction turned into the planet-size spaceship The Wandering Earth, which attained successes at the box office while carrying on the Chinese Communist Party’s mission of building a “community for the shared destiny of humankind.” This talk looks into the profound invisibility of certain essential elements of science fiction in the cinematic spectacle, which intensifies the politics of representation. A new approach to the epistemological and aesthetic invisibility, exemplified by Han Song’s recent novels, testifies to science fiction’s unique strength in unleashing the power of darkness, from where it creates a literary space for revelations of what is beyond the perceivable reality and political certainty. This talk focuses on Han Song’s science fictional visions of the chthonic, abysmal, and grotesque. These visions form a powerful counterbalance to the sublime aesthetics of the popular science fiction and creates a darker heterotopian reflection of contemporary China, or a Sino-topia.

Mingwei Song is an Associate Professor of Chinese Literature at Wellesley College. His research interests include modern Chinese literature, comparative literature, the bildungsroman, and science fiction. He is the author of The New Wave in Chinese Science Fiction: History, Poetics, Text (Shanghai, 2020) and Young China: National Rejuvenation and the Bildungsroman, 1900-1959 (Harvard, 2015). He is also the co-editor of The Reincarnated Giant: An Anthology of Twenty-First Century Chinese Science Fiction (Columbia, 2018). He has recently completed a monograph in English titled The Fear of Seeing: Poetics of the Invisible in Chinese Science Fiction.

Register in advance for this webinar:
https://yale.zoom.us/webinar/register/WN_x-WDmhbLT4uKSn9QjJG6dg