Appropriation and the Objects of Tea in Sixteenth-Century Japan 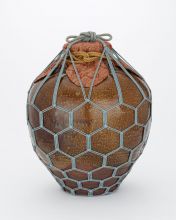 Tea men in sixteenth-century Japan inaugurated novel object-centered practices, employing all manner of things – paintings, calligraphies, metalwork vessels, lacquer containers, bamboo implements, and especially ceramics – in their pursuit of excellence in chanoyu, the practice of tea. Many of these dōgu, or utensils, were imported from abroad, made for settings other than chanoyu, and were not aestheticized in their original contexts; and so, physical and conceptual transformation was part and parcel of their use in Japan. In this presentation, I examine the ways in which objects were thus transformed, through the acts of repurposing, poeticizing, analogizing, and anthropomorphizing, among others. These many forms of chanoyu appropriation reshaped the visual landscape of Japan, setting standards that remained relevant – both as inspiration and irritant – for centuries thereafter.

Andrew M. Watsky specializes in the arts of Japan, with a research focus on the sixteenth century. Professor Watsky’s current work centers on chanoyu, the Japanese practice of drinking tea and appreciating the diverse objects employed in its consumption. His recent book, Chigusa and the Art of Tea, co-edited with Louise Cort and accompanying exhibitions at the Arthur M. Sackler Gallery in Washington, D.C. and the Princeton University Art Museum, traced the histories and aesthetics of a single tea-leaf storage jar from its creation in the thirteenth century up to the present day. His earlier monograph, Chikubushima: Deploying the Sacred Arts in Momoyama Japan, examined warrior patronage of the sacred realm in the late sixteenth through early seventeenth century and, in turn, how numinous meaning was expressed in the diverse yet interconnected mediums then most highly valued; it won both the John Whitney Hall Book Prize and the Shimada Prize. He has received numerous fellowships, including from the Japan Foundation, the Tokyo National Research Institute of Cultural Properties, and the John Simon Guggenheim Memorial Foundation. He has an interest, as well, in recent Japanese art, which stems from an earlier career at a contemporary art gallery in Tokyo.