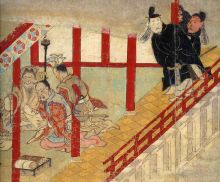 On the thirteenth day of the second month of Jishō 3 (1179), the notorious Rokuhara Novice and Former Chancellor, Taira no Kiyomori, presented a partial copy of the Chinese text Imperial Readings of the Taiping Era to the Japanese court. Nakayama Tadachika, the courtier who recorded the event in his diary, grudgingly observed that the text had “never before come to our sovereignty.” The performative appeal of such a gift is clear, for mastery of things Chinese reflected cultural capital like little else in late-twelfth and thirteenth-century Japan: Kiyomori’s gesture encapsulates the ideal of the culturally sophisticated warrior.

In the decades following Kiyomori’s offering—decades that saw civil war and the subsequent establishment of the Kamakura bakufu—China continued to occupy an important place in the medieval imagination. However, by the mid-thirteenth century, the powerful Hōjō family had consolidated their hold on the bakufu; and concomitant with actual and perceived reallocations of governmental power and authority within Japan, the Chinas available for mastery proliferated. In this talk, Professor Erin L. Brightwell will focus on depictions of China from three mid-thirteenth-century didactic texts to argue that they suggest a systematically bifurcated representation of China in medieval discourse—China both as cultural touchstone and cautionary tale—that evolved in response both to continental vicissitudes and the emerging demands of new Japanese readerships.

Erin L. Brightwell is Assistant Professor of Pre-modern Japanese Literature at the University of Michigan. After completing an MA in Chinese at the University of Washington and a PhD in Classical Japanese Literature at Princeton, she taught at Hiroshima University for a year before joining the faculty at Michigan. In her research, she is interested in issues of language and identity as well as the circulation of texts, motifs, and intellectual traditions both within and beyond Japan. Her current book project is an investigation of the ways in which literature, history, and cosmology intersect in the historiographic “Mirrors” (kagamimono 鏡物) of late twelfth- through early fourteenth-century Japan.