Home » Events » Opening Reception for Exhibition "From East to West: History of the Chinese Collection at Yale 1849-2019"

Opening Reception for Exhibition “From East to West: History of the Chinese Collection at Yale 1849-2019” 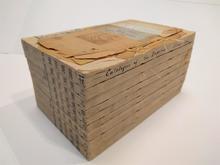 Yale University Library has been collecting Chinese language materials for 170 years. Six titles of Chinese classical texts were deposited at Yale in August 1849, making the College Library the first academic library in the United States to collect Chinese language books. Samuel Wells Williams, the inaugural Professor of Chinese Language and Literature at Yale, was largely responsible for the earliest acquisitions for the Library. Yung Wing, the first Chinese citizen to graduate from a major American college, was the most important contributor to the founding of Yale’s Chinese Collection. He intended for the Chinese Collection to promote the study of China, and consequently to enhance mutual understanding and cultural exchange between Chinese and Americans.

Many Yale faculty have contributed greatly to the development of the Chinese Collection. Professors Samuel Wells Williams and Frederick Wells Williams donated their joint personal library. Professor George Alexander Kennedy purchased books for the Library when he traveled to China. Professors Arthur Frederick Wright and Mary Clabaugh Wright contributed to the rapid growth of the Collection during the 1960s and 1970s. Most importantly, since its founding in 1961, the Council on East Asian Studies has played a critical role in supporting this world–renowned treasure trove of Chinese resources.

With the generous support of alumni, faculty and the Council, the Chinese Collection at Yale has expanded to one of the finest and largest collections of such kind outside China. This exhibit records the history of the books and contributors to the Collection over the past 170 years. Valuable items from the East Asia Library, Manuscripts & Archives, Sterling Memorial Library, Beinecke Rare Book & Manuscript Library, and the Haas Family Arts Library showcase the efforts and achievements made collaboratively by students, faculty and librarians at Yale.

Reading Edo: Data-driven Approaches for Japan Studies
Tuesday, Feb. 8th 7:00 PM to 8:00 PM
Pak Sheung Cheun’s Artwork “Nightmare Wallpaper” and Hong Kong’s Despair
Thursday, Feb. 10th 7:00 PM to 8:30 PM
A Kite Flies Against the Wind: Internationalism, identity, and ideology in the shaping of postwar China, and the legacy for today
Wednesday, Feb. 23rd 4:00 PM to 5:30 PM
A Slumlord’s View of Tokyo at the Turn of the Twentieth Century
Thursday, Feb. 24th 4:30 PM to 6:00 PM
Social Mobility across the Pacific: The Case of Japanese in the United States
Friday, Feb. 25th 2:00 PM to 3:30 PM
END_OF_DOCUMENT_TOKEN_TO_BE_REPLACED